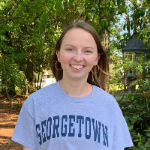 Christine Humowitz is a current M.A. candidate at Georgetown University in the American Government program and is working with CJJR as part of her practicum for the MAAG program. Christine graduated magna cum laude in May 2020 from Clemson University with degrees in political science and English with a minor in religious studies. She earned departmental honors in political science with her thesis titled “Means of Political, Religious, and Digital Participation in College-Age Americans,” in which she investigated whether college students tend to replace in-person political and religious behaviors with participation on social media platforms. Christine was inspired to work in social justice after volunteering at a nonprofit in her hometown of Pawleys Island, South Carolina called Teach My People, where she volunteered with first and second grade students in the summer program. Christine’s practicum with CJJR combines her empathy for children with her interest in policing issues and prison reform. Her primary research interest is the intersection of racial, ethnic, and gender disparities in juvenile justice systems and related systems of care.